The Complete History of Sennheiser

Sennheiser, German’s number one audio giant, first came into the limelight a few weeks after the end of the Second World War. And since then, the brand has undergone massive transformations and improvements to maintain its rank as one of the most exemplary audio service providers on the planet.

The smart sound technologies we enjoy today such as wireless headphones, noise cancellation, etc., are some of the innovations from the products that were first conceived by the Sennheiser in the weeks following the end of World War II.

In this post, we’ll narrate to you the full story of how this private brand has developed over the years- from its humble beginning to become a world leader, and the broad range of high fidelity and consumer products it produces.

Ready to discover all this information? Good.

You must be very eager to discover how Sennheiser came to be, right? To help you understand the brand better, we’ll discuss the history part into THREE sections as below:

As we’ve stated earlier on, Sennheiser came into existence in 1945, few weeks following the end of the World War II. And the brains behind the brand? Well, this was none other than Fritz Sennheiser, alongside a group of 7 other engineers. The elite group worked together at the University of Hannover laboratory, Germany, to come up with what would be recorded in the history books as the company’s first product ever- a voltmeter.

In the following year, the company was tirelessly working in the labs again to come up with the second product (that would actually make Sennheiser famous) – the microphone.

As few years passed, the laboratory was now busy working on miniaturization and in the year 1949, they created the DM3 invisible’ microphone. In the early 1950s, they created a set of magnetic, miniature headphones.

Ten years after creating their first voltmeter… What happened? The 7 member company has grown to 250 workers! Plus they expanded their range of products to include headphones, microphones, geophysical equipment, and mixers.

They rebranded to Sennheiser Electronic in 1958.

The 1960s would see Fritz Sennheiser earn the title of honorary professor from the “Hanover Technical University.” And the company went on create even more innovative designs including the world’s first monitor (popularly known as the Babysitter’), stereo microphone, and Telefunken’s answering machine.

Did you know that Sennheiser was the first company to introduce the Open Back Headphones? Right, they did this in 1968… The HD414 headphones sold 10million plus (mind you, the product remains the world’s best-selling headphone of our time). At the end of the decade, Sennheiser was already a household name known to all (including folks who had little or no interest in sound or electronics).

The company met more success as years went down, and by 1980, they were the sole headset suppliers to the German airline Lufthansa. However, this didn’t stop them from making more mind-blowing innovations. Though the wireless headphone is considered the modern phenomenon, this company has been working on it since the early 1980s (a period at which the company’s management was passed on to Jorg, Fritz’s son).

By mid-1990s, Sennheiser had expanded its territories to Europe and it was fully operating in the United Kingdom (U.K), France, Asia, USA, and Ireland. This was a few years after receiving an honor at 59th “Academy Awards” for one of their greatest products- the MKH 816 shotgun microphone.

Around this time, the company released some of their most powerful headphones. Examples of such products include the:

Fast forward, in today’s world, Sennheiser still runs the sound industry. Let’s see how it has been doing this:

The success experienced by this great company has created a big name for them on the whole planet. The company has expanded its territory far beyond Europe, and you’ll find them in China, Russia, and Japan.

At the time of the demise of the company founder, Fritz Sennheiser, in 2010, the company was sitting on a lake of the most prestigious accolades and awards in the industry.

In 2013, October to be precise, the company was awarded the prestigious “Philo T. Farnsworth Award” at the Hollywood’s 65th “Primetime Emmy Engineering Awards.”

Another notable recent development from Sennheiser (in May 2014) is the opening of competence center- the Sennheiser Streaming Technology (SST) – for the purpose of innovative streaming solutions.

The headquarters of Sennheiser are based at the Wedemark municipality, Germany, near Hannover (where the company actually started). They also have headquarters in the United States (based at Old Lyme, Connectuit).

It’s also interesting to note that the company owns factories in Wennebostel (also near Hannover), Tullamore (Ireland, since 1990) and in Albuquerque (Mexico, since 2000).

As you’ve noted from the history section above, Sennheiser is mainly associated with professional microphones as well as the consumer headphones.

Some of the most famous microphones to have been designed by the company include the MKH 416 shotgun (this one came to be the standard shotgun microphone for Hollywood), and the 816 which bears a similar design but has a longer reach.

The subsidiary products produced by the company include speakers, amplifiers, conferencing systems, aviation gaming and multimedia headsets, and micro-Hi-fi systems.

That’s the interesting history of Sennheiser. As you can see from the above story, Sennheiser is simply a story that highlights the extent of ambition, passion, and achievement. Beginning more than 70 years ago, with only a handful of employees, the company has grown and developed into one of the BIG names in the sound industry. 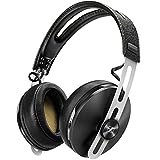